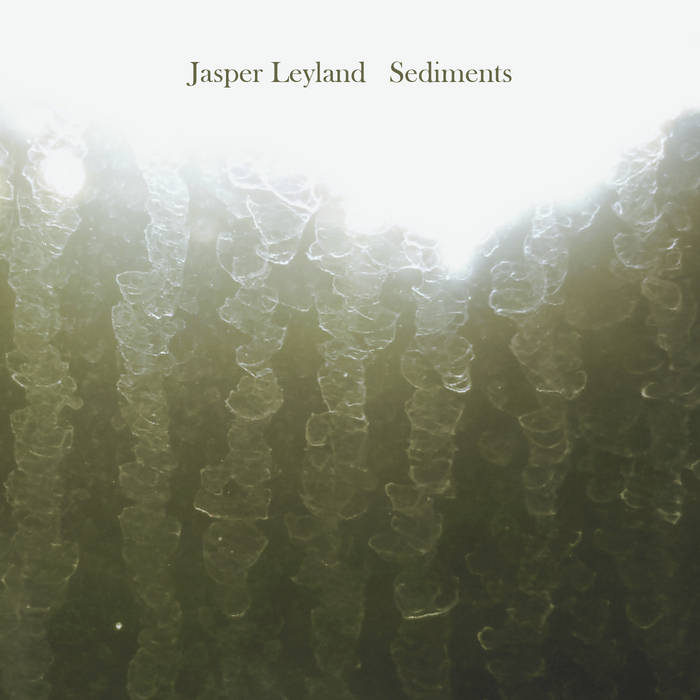 Jasper Leyland is the alias of Jonathan Brewster, based
in York, England. 'Sediments' is his fourth album, and in
my opinion also his best so far. What he has really
honed to perfection on this release is the unity between
the melodic elements and the fragments of field
recordings and found sounds which together make up
his sound. The latter elements have truly become part of
the instruments and melodies, as if trapped inside
during the forging process, like particles fixed in blown
glass or slide film. Inseparable like spores in amber or
grain in timber.

The title refers to the settling of small particles in water,
and this connects with the music on two levels. Sonically
the album evokes these particles before they become
layers of sediment, when they are still individual specks
of matter; hanging in the water and at one with it in
parallel to the sonic unity mentioned above. Jono's
production illuminates them as viewed from the bottom
of a stream, and pierced through by sunshine from the
world above.

The idea of sediments also chimes with his long-
expressed desire to refine and distill his sound to its
essence, and create a genuinely coherent album which
makes total sense as one. A similar process to the
coming to rest of particles in water, gradually sifted and
sorted as elements with an affinity are grouped
together. With 'Sediments' he has achieved this aim of a
release which sounds like it could have been made in a
single sitting.

When trying to put together something which works as
a whole there is a thin line between coherence and
variation – not too incongruous, yet not too samey
either. Fortunately 'Sediments' is defined by its deft
handling of such hard-to-strike balances. I've already
mentioned the unity between the different elements of
the sound, and Jono has not only achieved the right
balance here but also purely in terms of how many
elements are employed at any one time. The sound can
be described as minimal in the sense that it is carefully
thought through and thus absent of anything
unnecessary. Yet it is never skeletal or barren, and
always warm. I think it's perfect, exactly right, and
needs no more or no less. These kind of balances are
very hard to strike well, but when achieved they seem
so effortless that you don't notice the difficulty of it. All
that remains are the results of the process, which are a
joy to listen to.

The unity of elements and minimal balance to the album
are typified by the second track, 'They carry'. There are
creakings deep within the piece, like an unknown
creature stirring in the core of a pebble. Then an
exquisitely timed guitar progression, both inhabited and
surrounded by the creature's murmurs. A series of
gestures where each touch of the instrument is worth
waiting for, and where the wait between each touch is
perfectly weighted.

'Sediments' is beautiful and this is nowhere more so
than in 'The Skein, Our Cairn'. Joyful sweeps of zither
resonance emerge halfway through, flitting back and
forth like pond insects dancing on surface tension. The
pristine, brittle drones of 'It Swept' are like an ostensibly
featureless landscape, where the longer you look the
more its endless contours, grains and details fascinate.

The crafted, atmospheric sound sketches which open
'Moraine Halves' and 'The Kept' mark the most obvious
development on from previous Jasper Leyland releases,
and a direction in which I hope he continues. 'Sediments'
is also a satisfying progression on from 2008's 'Wake'
(12x50), in that it’s less murky and coarse yet still
retains some of the deliberate roughness to the
textures. It is simultaneously muffled and rough yet
pristine and lush. This album is perfectly judged and, as
I may have mentioned before, a joy to listen to.

mOAR is a series of and/OAR.

Bandcamp Daily  your guide to the world of Bandcamp

Featured sounds by K.Spark and WIZDUMB, plus Basi joins the show to discuss his latest release.